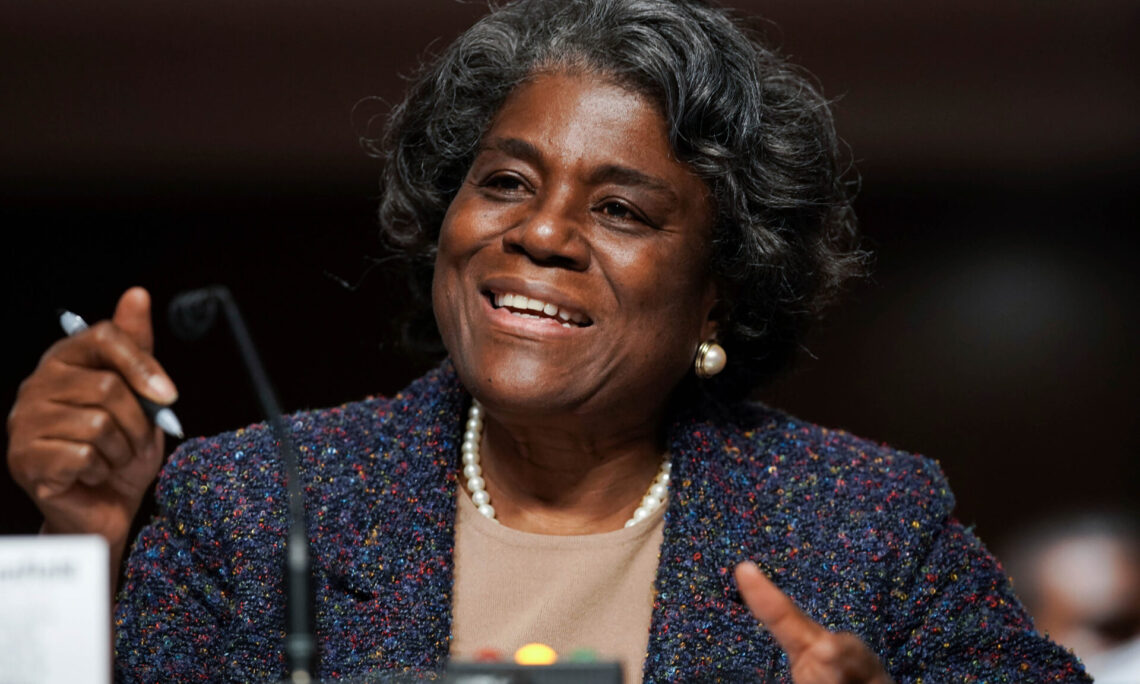 Ambassador Linda Thomas-Greenfield has a new role as the representative of the United States to the United Nations, America’s highest-profile diplomatic position after secretary of state.

Thomas-Greenfield is the 31st person to lead the U.S. Mission to the United Nations since the mission’s creation in 1947 by an act of Congress. She brings decades of experience in the U.S. Foreign Service to the job of representing U.S. interests in the U.N. Security Council and in the U.N. General Assembly on political issues, post-conflict peacebuilding, humanitarian assistance and human rights.

U.S. Vice President Harris administered the oath of office to Thomas-Greenfield on February 24, the day after the U.S. Senate confirmed the longtime diplomat’s nomination. Thomas-Greenfield will have status as a member of President Biden’s Cabinet. Calling her a seasoned, distinguished and groundbreaking diplomat, Biden said, “I want to hear her voice on all the major foreign policy discussions we have.”

There’s no shortage of challenges facing the U.N.: the global pandemic, a deepening climate emergency, racial injustice exacerbated by recent economic pressures, migration and extreme poverty. In some parts of the world authoritarians seek to consolidate their power.

“Our approach is to do what President Biden said we would do in his inaugural address: repair our alliances, reengage with multilateral institutions, and lead by the power of example,” the ambassador told ShareAmerica.

Thomas-Greenfield arrived at the U.N. just in time for the United States to assume the rotating presidency of the U.N. Security Council, where she immediately put the issue of conflict-driven hunger on the agenda.

The eldest of eight children, Thomas-Greenfield was born to a mother who was a cook and a father who worked as a day laborer and could not read. Her parents raised her in Baker — a small, segregated town in Louisiana terrorized by the Ku Klux Klan, an infamous hate group with a history of violence, especially against African Americans.

Thomas-Greenfield graduated from a segregated high school before enrolling as one of the first African American women at Louisiana State University, where she studied alongside the likes of David Duke, who would become a Klan leader.

“Instead of hardening my heart, those experiences shaped my perspectives in a different way,” she said. “They taught me the power of kindness. I learned to see how kindness isn’t a weakness, but a strength.”

After graduating from college — the first in her family to do so — Thomas-Greenfield earned a master’s degree from the University of Wisconsin-Madison. She joined the Foreign Service in 1982, beginning a career that would take her to four continents. She served as U.S. ambassador to Liberia and held postings in Switzerland, Pakistan, Kenya, The Gambia, Nigeria and Jamaica.

In Washington, Thomas-Greenfield led the Bureau of African Affairs as assistant secretary of state during the Ebola crisis. Prior to that, she oversaw personnel functions for the State Department’s 70,000-strong workforce. She championed diversity, equity and inclusion efforts at the department and will continue to promote them at the U.N. and, more broadly, lead by the power of America’s example.

Thomas-Greenfield says she plans to engage local leaders and young people across the United States on global issues, to take the U.N. out of New York, so to speak. “We will go above and beyond to ensure that our work and our advocacy reflects the will and perspectives of all Americans,” she said.