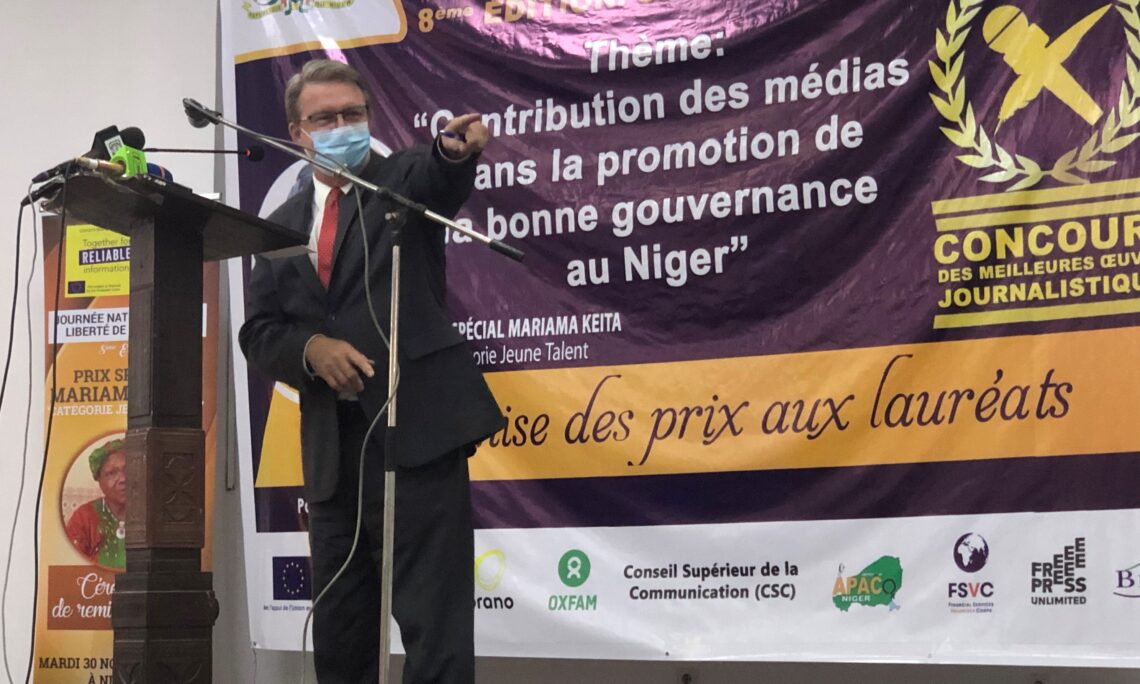 I’m glad to be here today to celebrate the 8th edition of Nigerien National Press Freedom Day.  I am excited to celebrate it at Maison de la Presse with all of you.  As per my custom, a Hausa proverb comes to mind: “Magana Jari Ce.”  This roughly means: “Words are treasure.”

In almost every meeting with our Nigerien and international counterparts these past four years, I discussed the importance of civil liberties in Niger.  We highlight that citizens’ rights of free press, free speech, assembly, association, and redress must be protected.  We underscore that the role of civil liberties in a free society, especially as related to the media, are vital to establishing and maintaining good governance.

So much of good governance centers on the responsibility the press plays in the quality, fairness, and accuracy of its reporting of the day-to-day activities and decisions of the government.  The press also play an important role in access to information for citizens, promoting transparency, and exposing corruption to encourage formal investigation and prosecution.

The United States holds this fundamental right of a free press dear.  It is enshrined in the first amendment of our Constitution.  While the amendment is only 45 words long, it protects our most essential liberties as humans – free speech and a free press, as well as freedom of religion, to assemble, and to petition.  With these words, we uphold our democracy and strive to maintain good governance.

Being a journalist is not easy.  We are bombarded daily with information, not all of it truthful, and not all of it intended for the public good.  There are also new media platforms developing every day, and some are very complex and difficult to understand.

Another reality we face is that there are those who prefer that journalists not do their jobs at all.  And to that end, the U.S. Embassy monitors closely all legal cases which involve members of the Nigerien press.

We do this because the U.S.  government is committed to supporting responsible journalism.  We believe that developing a robust and trustworthy press corps is part of good governance and is a critical component of our partnership.  While we work with our Nigerien partners to promote economic development and security, we also focus on strengthening the press corps through training and other programs.

Our Public Diplomacy Section and USAID/Niger have supported training for journalists and bloggers on political communication during elections, on covering violent extremism, and on investigative journalism.  In addition, the U.S. Embassy’s Public Diplomacy Section has partnered with the University of Missouri, which has the United States’ oldest journalism school, to conduct journalism trainings in Niger in January.  Professors from will train journalists in Niamey, Agadez, Zinder, and Maradi.  We are very excited for this program and what it has to offer Nigerien journalism and press freedom and its impact on promoting good governance.

In closing, I want to join the chorus of people congratulating Nigerien journalists and media organizations such as Maison de la Presse for all the work you do in promoting, protecting, and advancing press freedom in Niger.  What you do is critical to establishing good governance Niger and ensuring “Le Niger se lève.”  Thank you.