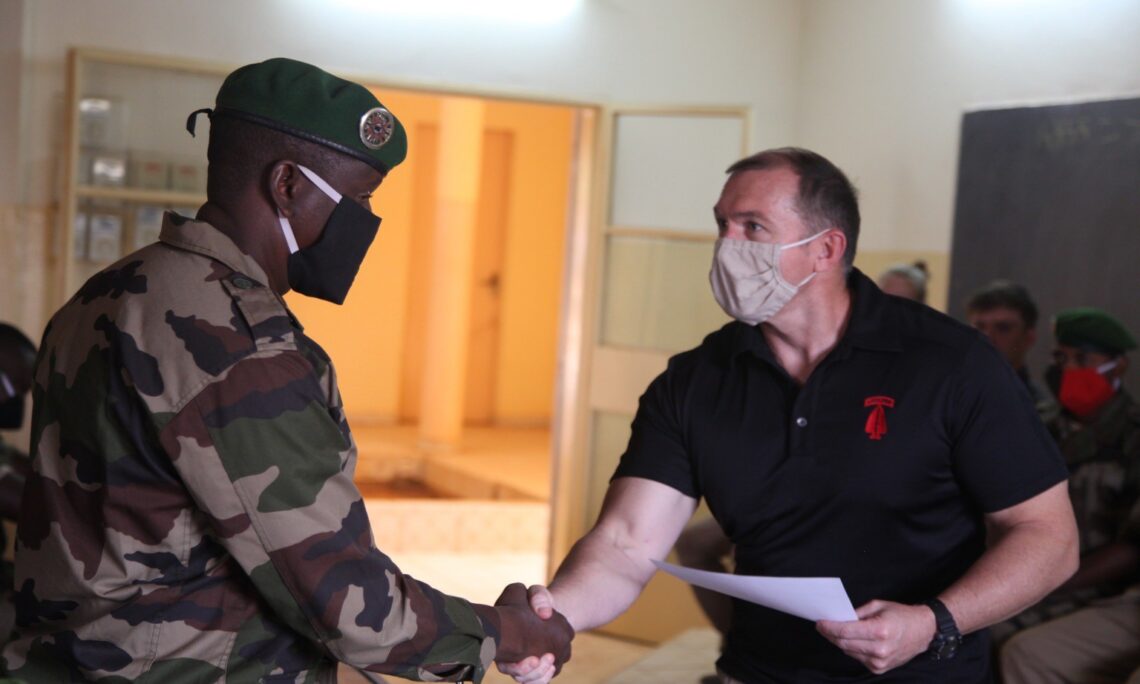 On February 5, 2021, the Nigerien Armed Forces’ Engineering branch – Génie – hosted a ceremony recognizing the most recent graduates of its Explosive Ordinance Disposal (EOD) training program. The Class of 11 consisted of non-commissioned and commissioned officers selected to attend the advanced training program.  The graduation of this class brings the total number of graduates to 92.

The six-week training program included a joint knowledge exchange of best practices with U.S. Special Operations Forces experts on explosive ordinance disposal and other combat related tasks.  Training consisted of both classroom instruction and practical exercises.  U.S. service-members taught Nigerien Armed Forces soldiers and leaders valuable field skills, such as how to locate and react to an improvised explosive device, how to set up a cordon, and procedures to clear the area.  Additional instruction included how to react to enemy attacks, movement tactics, and how to work in and out of a vehicle.

The joint knowledge exchange between the FAN Génie and U.S. Special Operations Forces is designed to improve the effectiveness and survivability of Nigerien Armed Forces personnel once they deploy to combat violent extremist organizations across Niger.  Upon completion of this course, FAN members are better prepared to defeat explosive threats they encounter on the battlefield.

Reports indicate that forward-deployed Génie soldiers have been more successful in detecting and defusing improvised explosive devices since the training program began in mid-2019.  The enthusiasm of FAN soldiers and the unwavering commitment of the Génie leadership has been instrumental to the success of forward deployed forces’ in the fight to defeat Niger’s enemies and keep Nigeriens safe.

The next block of joint training will begin soon, building on the trainees’ knowledge and the bond that is forged between two allies striving for a common goal to protect the sovereignty of Niger and to keep its people safe and secure.