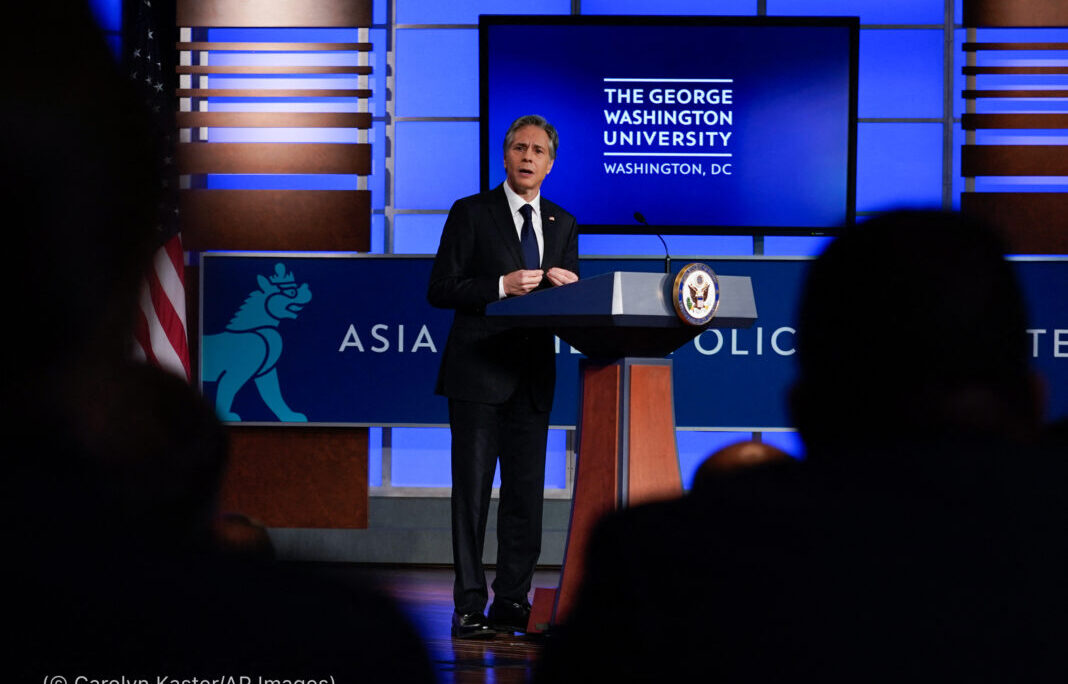 Secretary of State Antony Blinken speaks at George Washington University in Washington, Thursday, May 26, 2022, outlining the administration's policy toward China at an event hosted by the Asia Society. (AP Photo/ Carolyn Kaster)

The United States is committed to advancing global peace, prosperity, and freedom, and to building a world where nations can forge their own paths, Secretary of State Antony Blinken said.

In a major speech May 26 at George Washington University in Washington, Blinken outlined the Biden-Harris administration’s approach to defending and reforming the principles and international institutions that have lifted billions of people out of poverty while supporting human rights and national sovereignty.

“Our task is to prove once again that democracy can meet urgent challenges, create opportunity, advance human dignity,” Blinken said. “The future belongs to those who believe in freedom and that all countries will be free to chart their own paths without coercion.”

Blinken’s remarks contrasted the United States’ vision with the challenges posed by the People’s Republic of China (PRC).

“China is the only country with both the intent to reshape the international order and, increasingly, the economic, diplomatic, military, and technological power to do it,” Blinken said. “Beijing’s vision would move us away from the universal values that have sustained so much of the world’s progress over the past 75 years.”

He cited PRC President Xi Jinping’s defense of Vladimir Putin during Russia’s military buildup to invade Ukraine, as well as the PRC’s ongoing genocide and crimes against humanity in Xinjiang, human rights abuses against Tibetans and the crackdown on democracy in Hong Kong.

He also said the PRC’s economic policies undermine the principles that enabled its economic rise, rather than upholding them for other nations to similarly benefit. Blinken emphasized that the United States is not “looking for conflict or a new Cold War” with the PRC, or to change its political system. Instead, the United States and its partners are working to shape a future that benefits all nations, Blinken said.

That includes partnering with the PRC where possible. He cited the U.S. and China’s 2021 Glasgow joint declaration to address emissions from methane and coal as one successful collaboration and said opportunities for future cooperation include fighting the global food shortage.

“Working together to solve great challenges is what the world expects from great powers,” Blinken said. “There’s no reason why our great nations cannot coexist peacefully, and share in and contribute to human progress together.”

The United States is seeking to modernize the global system to ensure that it works for “all nations, big and small.” To do that, Blinken said, it is investing in its people, aligning its efforts with like-minded partners and competing on a level playing field.

By investing in infrastructure, education and research, the United States is betting on the ingenuity of its workforce to develop the technologies of the future. That workforce includes many people from China who came to the United States to study and then stayed.

Partnerships, such as the U.S.-EU Trade and Technology Council, are ensuring new technologies support democratic, not authoritarian, values. The new Indo-Pacific Economic Framework for Prosperity (IPEF), launched by President Biden in Tokyo May 23, aims to advance broad-based economic growth and deepen cooperation to address 21st-century global challenges. IPEF’s 13 founding members account for more than 40% of the global economy.

The United States is working with its Quad partners Australia, India and Japan, as well as the Association of Southeast Asian Nations, to tackle global challenges like COVID-19 and the climate crisis.

“We cannot rely on Beijing to change its trajectory,” Blinken said. “So we will shape the strategic environment around Beijing to advance our vision for an open, inclusive international system.”