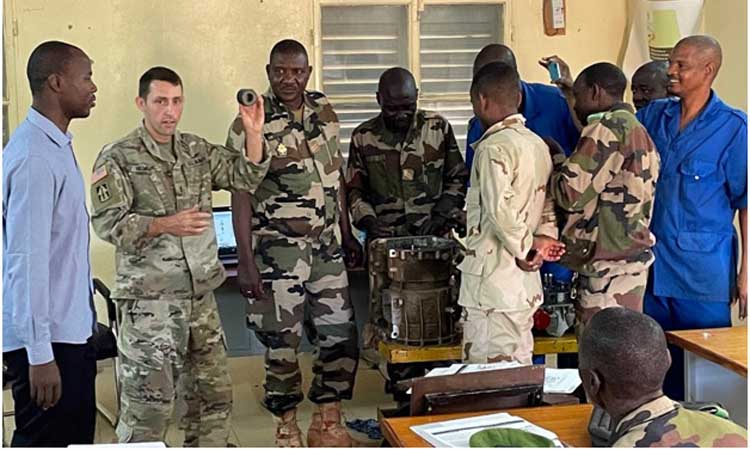 U.S. and Nigerien Soldiers working on reassembly of Allison Transmission

During the second week of the exchange, the FAN mechanics applied their new skills and knowledge to hands on practice including transmission disassemble and reassemble and multi-meter troubleshooting of engine, transmission, and electrical components.  Indiana Guardsmen Chief Warrant Officer 3 Jason Helmsing and Chief Warrant Officer 3 David Brey from the Indiana National Guard taught the Nigerien Armed Forces Soldiers valuable mechanical skills they will be able to implement during future operations.

“Indiana has been the state partner with Niger since 2017, and we are thankful for opportunities like this to work with our Nigerien counterparts.  We not only get to teach them new skills, but we learn so much from them, which makes us better too.  It is motivating to work with the Nigerien Soldiers, they are eager to learn, extremely knowledgeable, and take pride in their craftsmanship,” explained U.S. Army Chief Warrant Officer 3 Helmsing.

Adjutant-Chief Yahaya Mahamadou participated in the training and was very appreciative of the opportunity, “The hands-on mechanical training provided by the Indiana National Guard was very beneficial and the knowledge we received will help us to maintain our Mamba vehicles.  We are very appreciative and always welcome training provided by the United States because they consistently deliver the best training.”

The United States has now donated 90 Mamba armored personnel carriers that are utilized by the FAN across the country in the fight against terrorism. The training provided by the U.S. Indiana National Guard will enable FAN Soldiers to maintain the vehicles and keep them operational.