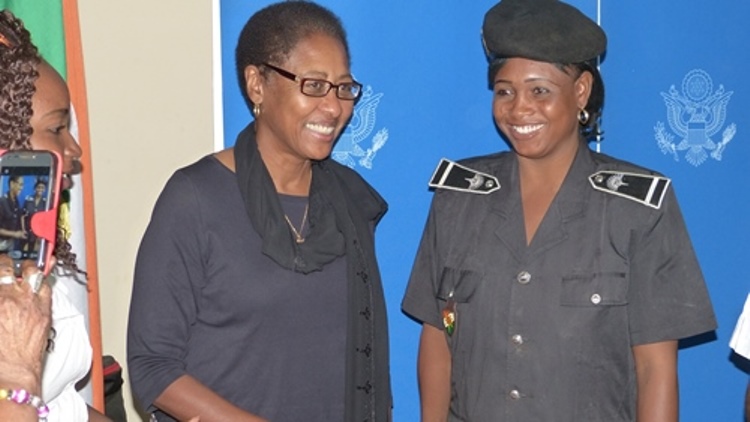 Ambassador Reddick with a Police Women.

To commemorate this year’s International Day of the Girl, the Ambassador spoke at a conference organized by the Public Affairs Section in coordination with local NGO Femme Action et Développement (FAD).  The conference-debate focused on the theme:  “Girls: Peace and Security”.

In her opening remarks, Ambassador Reddick urged the audience to work together to break down barriers that prevent girls and boys from achieving their highest potential and from becoming the next generation of leaders in their communities and countries.  Following the Ambassador’s remarks, the president of the NGO LUCOFEVM Djafarou Mariama Larré gave a presentation on the importance of adolescent girls’ education and empowerment; Resolution 1325, the law that ensures gender equality in Niger; and the International Day of the Girl theme for 2015: “The Power of the Adolescent Girl: Vision for 2030.”  The event ended with a question and answer session, followed by refreshments.

On Tuesday, October 13, Femme Action et Développement (FAD) continued the International Day of the Girl activities with a donation of notebooks and other school supplies to female students at the Niamey School for the Deaf.