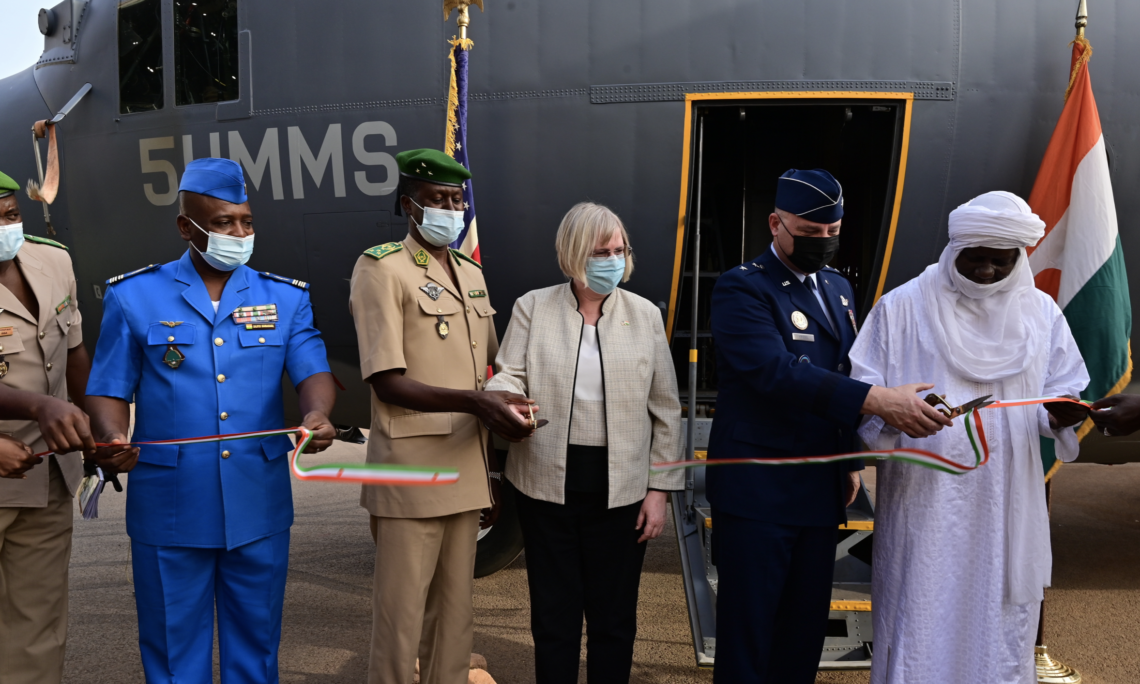 Good afternoon! I am delighted to celebrate today the arrival of this magnificent aircraft behind me, designated “Five Uniform Mike Mike Sierra.”  Niger’s second C-130!  This momentous occasion is a testament to the long-standing, enduring, and productive partnership between the United States and Niger.

I am honored to welcome to our ceremony today U.S. Major General James Kriesel, the National Guard Assistant to the Commander of U.S. Air Forces in Europe and Air Forces Africa.  His presence here – his second visit to Niger this year – is yet another confirmation of the importance of the United States’ partnership with Niger.

Considering our nations’ strong partnership in Niger’s aviation programs, I am reminded of a Hausa proverb: “Zamu Hada Qarfi da Qarfe,” meaning “We will stand together.”

Since renewing partnership on the C-130 program in 2015, the United States has provided over $30 million dollars to ensure the success of this endeavor.  Together, we have invested in Niger’s future in numerous ways.  For example, through delivering training and technical assistance to Niger Air Force flight and maintenance crews; supplying spare parts and equipment; and providing aircraft fuel.

Seventeen million dollars of this support has furnished critical infrastructure.  The United States recently funded the refurbishment of this hangar in which we hold today’s ceremony.  From the floor to the roof, from lighting to offices, this enormous hangar is now ready for use and can fit two C-130s.  Additionally, we built a C-130 Hangar at AB201 in Agadez.  And soon we will complete a warehouse for spare aviation parts not far from here on Air Base 101.

In further support of our strong partnership, I am pleased to announce that next year we have the intention to start construction on a new C-130 hangar on this base.  We aim to ensure Niger has adequate facilities to fly and maintain these capable aircraft.

Operationally, Niger’s Cessna 208 Fleet – one of which is in this hangar today – has earned a stellar international reputation, maintaining a high operations tempo in support of both Nigerien and multi-national security missions.

Strategically, the Nigerien Armed Forces have shown tremendous dedication in professionalizing its forces.  Doing so ensures their women and men are prepared to fight security threats in the Sahel.

I would like to recognize the Niger Air Force for setting a high standard for integrating women into its crew force – the contributions of women like Captain Ouma Laouali, Lieutenant Nadiya, and Lieutenant Azaliya have been integral to the C-130 program’s success.

Now, as we welcome this C-130 to Niger, I would like to emphasize this could not have happened without the hard work and dedication of our Nigerien and American teams and their leaders.

I commend Minister Indattou, General Mody, Colonel Mainassara, and countless other Nigeriens for their dedicated leadership.

I want to thank the U.S. Office of Security Cooperation for their tireless efforts to ensure the Nigerien C-130 program is successful and sustainable.

Lastly, I would like to thank the dedicated and passionate C-130 pilots, crewmembers, and maintainers.  With you in the cockpit, your Air Force will undoubtedly reach new heights.  As we say in the Embassy, “Niger se lève!”

Thank you for your kind attention.