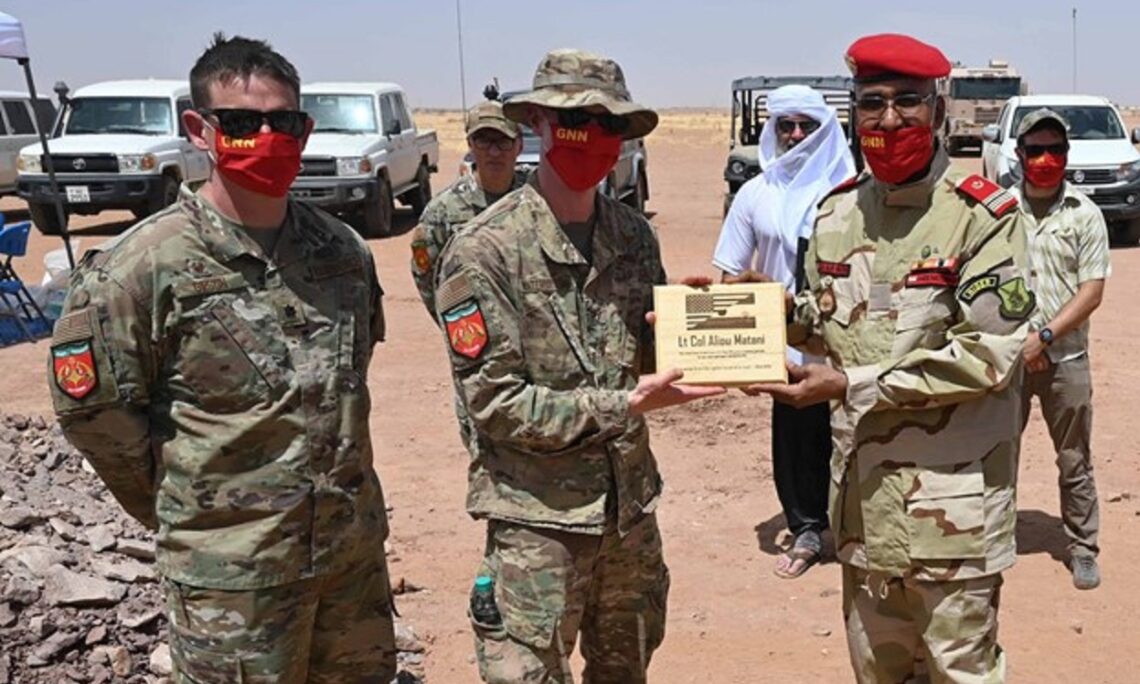 [Agadez, Niger] On Sunday, May 30, Lieutenant Colonel Aliou Matani, along with several high-ranking officers of the Nigerien National Guard and Forces Armées Nigeriennes, recognized American leadership at Nigerien Air Base 201 while providing a camel feast to honor the U.S. and Nigerien partnerships on the U.S. holiday of Memorial Day.

Memorial Day is a day of remembrance of the men and women who have died in U.S. military service.  In 1971, Memorial Day was established as a U.S. federal holiday taking place on the last Monday in May.

Matani and his team presented gifts to Colonel Eric Winterbottom and Lieutenant Colonel Jeffrey Gipson, who received them on behalf of all American military members at AB 201.

“Commander, you do all the work that needs to be done with enthusiasm for the mission that was given to you and the mission that you have with the GNN,” said Matani. “With your courage and your constant availability, this makes the U.S. proud to have you as a high-ranking officer.”

For nearly 1,500 years, nomads of the Western Sahara have respected the camel.  Camels are essential to life in the desert environment, constituting both the main means of production and exchange.  It is a marvel for Nigeriens to donate such an important piece of their culture to the U.S. military members at AB 201.

The camel was cleaned on-site, then cooked underground for roughly 20 hours according to traditional cooking methods.  To cook the camel, Matani invited a skilled chef who traveled three days to celebrate the event at AB 201.  The chef was assisted by the GNN and FAN to serve the meal to the participants.

Nearly 100 American and 20 Nigerien personnel gathered for the event, demonstrating the importance and solemnity of honoring comrades who have fallen in war.  The event also displayed the partnership and mutual respect both countries show for one another.

“This excellent partnership is built on your amazing enthusiasm and leadership that has brought the American and Nigerien teams together,” said Winterbottom. “Thank you for forging this partnership through people like me.  You are the constant that makes this happen and I want to say thank you.”

Col. Winterbottom and Lt. Col. Gipson (left) present a gift of appreciation to GNN Lt. Col. Aliou Matani on May 31, 2021 at Nigerien Air Base 201, Agadez, Niger.  Since 1990, the U.S. has provided $25 million dollars to help partnerships flourish in areas of law enforcement, border security, and civilian safety through counter-terrorism exchanges and equipment donation.

American military members listen to instructions on raising the cooked camel from an underground oven May 31, 2021 at Nigerien Air Base 201, Agadez, Niger. The feast demonstrated the shared commitment of Nigeriens and Americans to counter terrorism, sustain peace, and enhance security in the Sahel.