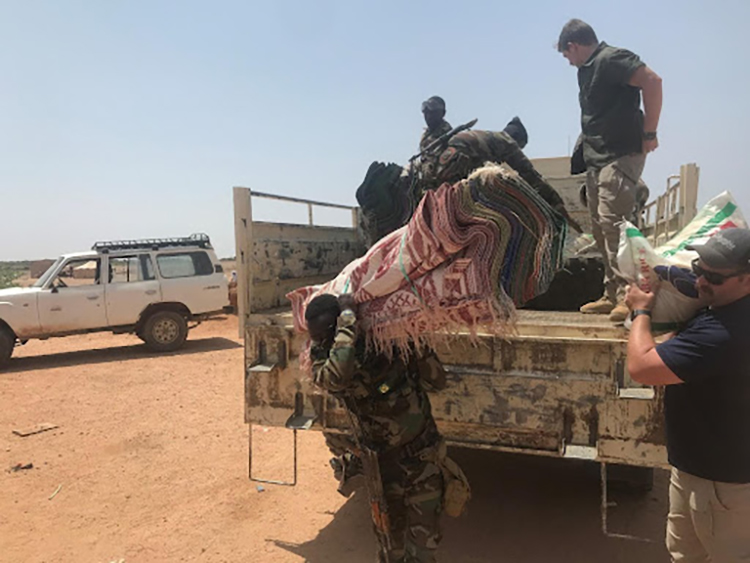 AGADEZ, Niger — Nigerien and U.S. civil affairs teams from Nigerien Air Base 201 partnered again to deliver humanitarian aid to the citizens of Teghazert, Niger, approximately 8 km east of Agadez on Sept 8, 2021.   The donation consisted of footballs, rice, prayer mats, buckets, soap, and mosquito netting and was timed to coincide with a gathering to celebrate the election of Teghazert’s new chief.

The donation was the third combined operation from Nigerien Air Base 201 between U.S. civil affairs and the recently formed Forces Armées Nigériennes (FAN) counterpart, the Action Civil‐Militaire (ACM).  The first two missions this spring were humanitarian supply donations to Beital and Ikadewan, north of Agadez.

For the mission to Teghazert, the FAN ACM chose the village and assessed its needs. The U.S. civil affairs team provided the humanitarian aid donation items and provided operational support behind the scenes.  Both teams shared responsibility for executing the mission.

“The reactions we see from the local villagers is the most rewarding aspect of working with the ACM,” he said. “The people appreciate when they see both U.S. and Nigerien forces together.”

The commander of Nigerien Air Base 201, Capt. Badage Oumarou, declared, “The various actions of the Security and Defense Forces and American partners are greatly appreciated by the local population. The inhabitants of Teghazert have shown their gratitude and urge the expansion and continuity of this diversity.”

The FAN ACM and U.S. civil affairs teams plan to conduct more missions together in the future to make a positive impact in the Agadez region.

“Aid deliveries like this show the FAN ACM’s long-term value, especially as the unit continues to expand its outreach to serve local communities,” Bovee said.

Teghazert leaders pose in front of donated items with members of the U.S. civil affairs, FAN ACM, and U.S. military personnel from Nigerien Air Base 201 in Teghazert, Niger on Sept 8, 2021.  U.S. military personnel accompanied the civil affairs teams to congratulate the new village chief and establish positive relationships between Nigerien Air Base 201 and Teghazert. (Courtesy photo)

A member of the FAN ACM plays football with children in Teghazert, Niger on Sept 8, 2021.  Footballs, due to their popularity with the youth, are regularly donated along with other items. (Courtesy photo)

Sgt. Joseph Bovee (center) and members of the FAN ACM load water bottles in preparation for their mission to Teghazert at Nigerien Air Base 201, Agadez, Niger on Sept 7, 2021.  When discussing the mission with the FAN ACM, Sgt. Bovee said, “The people appreciate when they see both U.S. and Nigerien forces together.” (Courtesy photo)