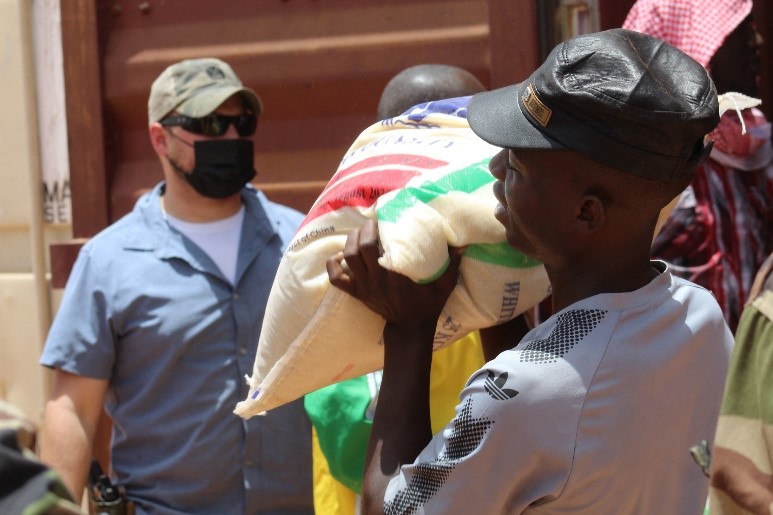 The aid delivery was the first combined operation out of Airbase 201 between U.S. Civil Affairs and their recently formed Forces Armees Nigeriennes (FAN) counterpart, the Action Civil‐Militaire (ACM).  It also marked the ACM’s inaugural humanitarian aid delivery from Airbase 201.  ACM was responsible for selecting the village and executing the mission, while the U.S. Civil Affairs team provided the humanitarian aid for the ACM to deliver and worked behind the scenes to provide operational support.

Capt. Verzoni, the U.S. Civil Affairs team commander, discussed how impressed he was with the ACM. He said, “The Nigerien ACM team is an impressive group of people who genuinely want to help their fellow countrymen, and it is an honor working with them to improve people’s lives in Niger.”

The Commanders of Defense Zone 2, Col. Ango, and Air Base 201, Capt. Oumarou, declared, “We are incredibly pleased with how smoothly the logistics and communications went as the mission progressed, allowing us to aid my fellow countrymen in need.  Our ACM soldiers planned the delivery carefully, which resulted in executing their inaugural mission safely.”

As village leaders expressed gratitude for the donation, ACM Non-Commissioned Officers explained, “It was not just us, but American forces made it possible too.  We are one team.”

In the future, the ACM and U.S. Civil Affairs teams plan to conduct more missions together to make a positive impact in the area around AB201.