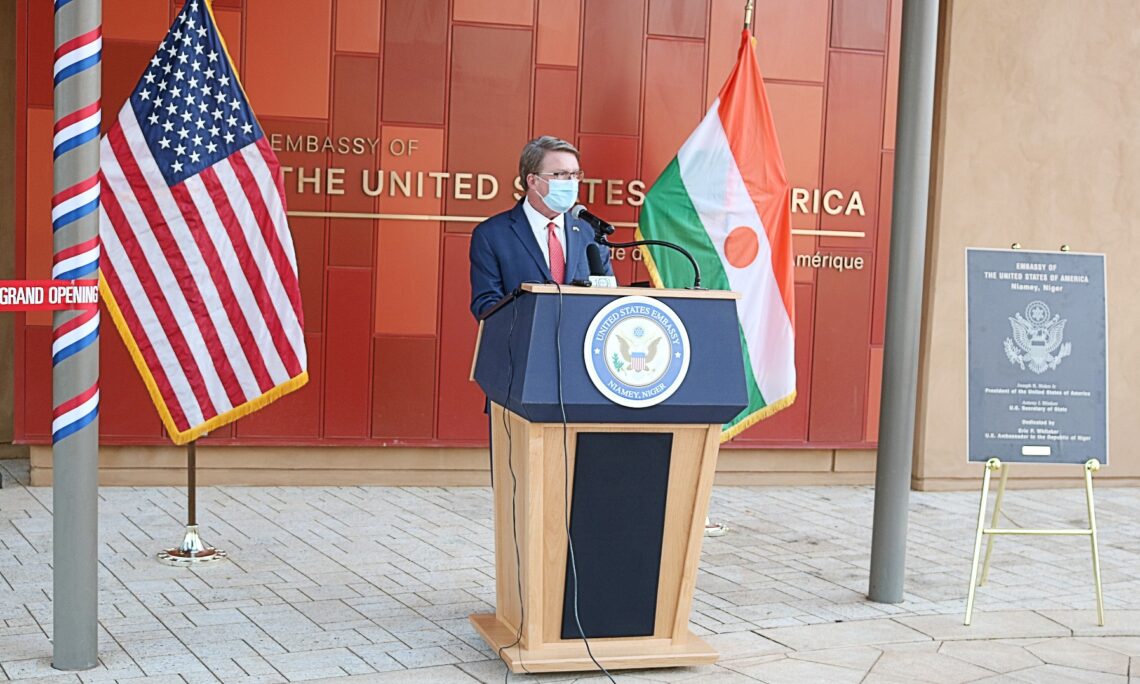 On June 24, 2021, I was thrilled to preside over an historic occasion 61 years in the making: the dedication of our new, sustainable, state-of-the-art embassy building in Niamey.

In 1960, the United States was one of the first countries to recognize Niger as a sovereign nation.  In those early years we had a facility downtown, but for 50 years we have had an embassy on an 11-acre campus in Koira Kano.  It is the central hub for us to promote our “4D” approach of diplomacy, development, democracy, and defense to build with Nigeriens a prosperous, free, and secure nation.

While we have been here for 61 years, our magnificent new building is proof we are here to stay.  It reflects Niger’s many cultures and landscapes.  With a $288 million USD budget and $53 million USD impact to the local economy, the new embassy represents the best of American architecture, engineering, and construction.  The architects, designers, and builders scrutinized building materials and colors very carefully to ensure they blend with Nigerien content and culture.  Of the 1,700 people who have helped construct the building, 1,500 were Nigeriens. As such, this building stands as a symbol of our sustained and enduring commitment to the people of Niger.

Sustainability is a focus.  To be good stewards of the environment and a good neighbor within the city of Niamey, the new Embassy implements several sustainability strategies.  Chief among them, is our use of solar energy.  The extensive array of solar panels manufactured in the United States will furnish approximately 45% of the building’s electricity.  Solar-powered systems also produce hot water for the building.  Additionally, in utilizing treated wastewater and in xeriscaping the grounds, water required for irrigation will be reduced by about 87%.   In total, we expect to reduce our energy costs by 65%.

But how does our work inside the new building benefit the lives of the Nigerien people and prove that we are here to stay?

Since 2012, we have spent more than $500 million dollars to train and equip Niger’s defense and security forces so it can better face security challenges such as heinous violent extremist organizations.  We work in a wide variety of areas that include aviation capacity building, antiterrorism assistance, force professionalization, peacekeeping operations, counter-improvised explosive device techniques, and integrating more women into the security professions.

Since 2018, the Millennium Challenge Compact (MCC), a $437 million five-year partnership with Niger, has worked to improve Nigerien lives through rehabilitation of irrigation infrastructure for thousands of hectares and some 300 kilometers of important road segments to expand market access, particularly in the country’s interior.  Over the past three years, this program has launched reforms that will improve access to important farming inputs such as fertilizer and veterinary services, sustain ground water resources and maintain the national roads network – all which will have a positive impact on the livelihoods of for rural Nigeriens.

The U.S. Agency for International Development invests close to $200 million each year to promote good governance and improve agriculture and food security, health, and education, as well as ensuring women and youth have greater economic opportunity and that out-of-school girls have a second chance at education

We also maintain and operate a vibrant network of American Spaces throughout Niger.  Most notable among them the American Cultural Center and Rosa Parks Library in Niamey.  Originally in the Plateau neighborhood, it is now inside the new embassy building, and is now open for visitors.  Nigeriens can take advantage of the free Internet, the collections of books, and resources about studying in the United States.

Our new building and all of our work proves we are here to stay.  From within the embassy, American diplomats and their Nigerien coworkers work together with Nigerien government officials, security professionals, civil society leaders, students, and Nigerien citizens so that together we can build a stable, prosperous, and secure Niger.  One that we will all recognize as affirming my belief that “Le Niger se lève.”