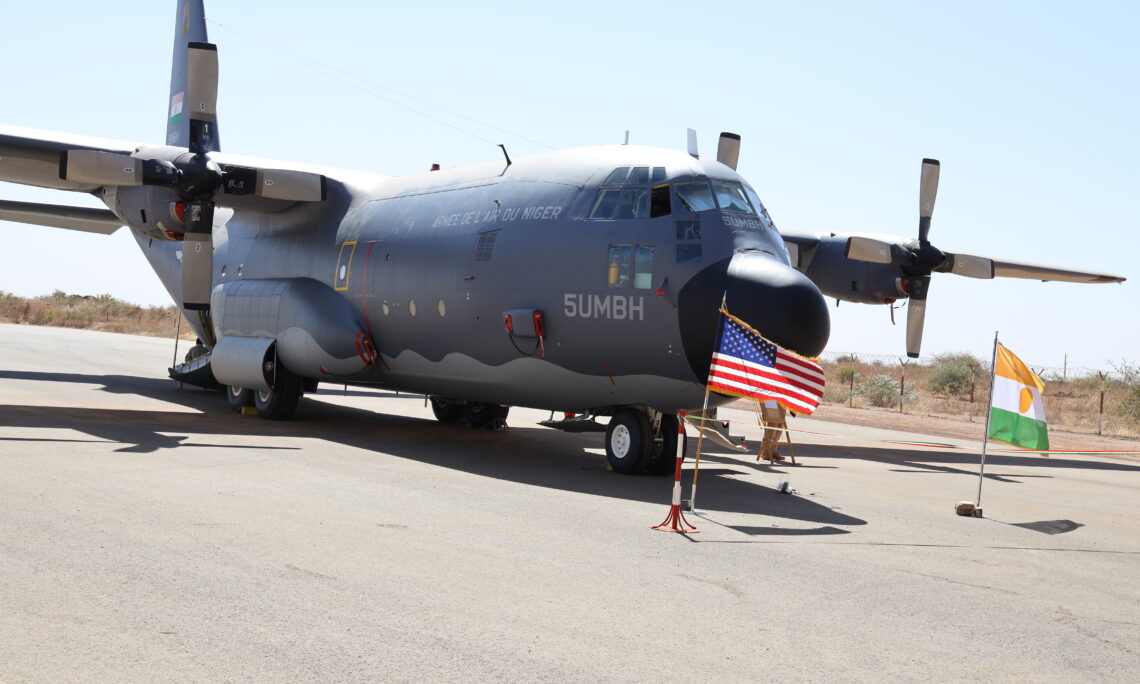 On Monday January 4, the U.S. Secretary of the Air Force, Barbara Barrett, travelled to Niger to join Ambassador Whitaker for meetings with U.S. and Nigerien senior defense leaders and attend the Nigerien C-130 arrival ceremony.  During her visit, Secretary Barrett also attended a Women, Peace, and Security luncheon that brought together Nigerien military and civilian stakeholders to discuss Niger’s successes and challenges to increasing women’s participation in the peace process.  The event highlighted the crucial role women play in conflict resolution and in ensuring lasting security and stability.  Among the participants was Captain Ouma Laouali, Niger’s first female C-208 Cessna ISR and C-130 Pilot.

Ambassador Whitaker, Secretary Barrett, Nigerien Minster of Defense Katambe, and Nigerien Chief of Defense General Mody attended the C-130 ceremony at Air Base 101 in Niamey.  The ceremony celebrated the arrival of 5U-MBH, whose return was a joint U.S. and Nigerien endeavor.  Since 2015, the United States has provided more than $30 million USD to develop the Nigerien Air Force’s C-130 program, to include training, spare parts, infrastructure, fuel, and support equipment.

During the ceremony, Ambassador Whitaker stated, “As Niger endeavors to bring peace, security, and stability to the region, I am certain the Nigerien Armed Forces, with the C-130 now re-joining the aviation fleet, will continue to establish itself as a model both for operational effectiveness on the battlefield, and for the professionalism with which your Airmen and Soldiers display in and out of uniform.”

The arrival of the C-130 puts Niger among 70 other nations with this transport aircraft.  The C-130 will provide vital logistics capability to the Defense Force which is stretched along a border with seven other nations.  In addition to helping bring the C-130 home, the United States has invested in Nigerien service members and infrastructure.  Ambassador Whitaker highlighted the United States trained 16 Nigerien pilots, 19 maintainers, 6 crew chiefs, 5 loadmasters, and 1 flight engineer.  Additionally, the United States spent $17 million in critical infrastructure upgrades including a C-130 Hangar at Air Base 201 in Agadez.  The United States refurbished a C-130 hangar at AB101 in Niamey and plans to build a spare parts hangar there too.

Secretary Barrett’s visit highlights the enduring and long-standing partnership between the United States and Niger.  Secretary Barrett concluded, “Standing shoulder-to-shoulder, the U.S. and Nigerien forces have united to advance mutual security and trust. We deeply appreciate the many ways our nations work together. Today’s ceremonial delivery of Niger’s new C-130 is an important milestone in furthering our robust partnership and the interoperability of our air forces.”