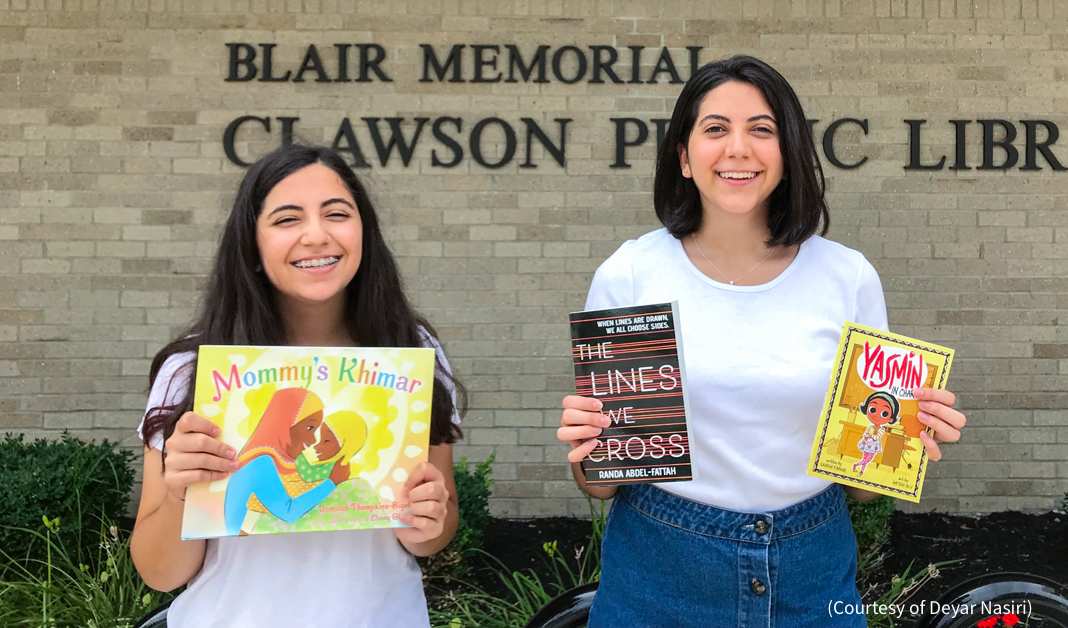 Mena Nasiri (on the left) and Zena (on the right) are holding books with female Muslim main characters in front of Clawson Public Library in Michigan, where they donated to in August 2019. (Courtesy of Deyar Nasiri)

When Mena and Zena Nasiri were in elementary school, they wanted to do a class project on Muslim women in history, but soon ran into a roadblock.

“We went to our local library and couldn’t find any books on any Muslim women,” said Zena. “That was the first time we realized there was a lack of diversity and representation in the books in our community.”

The two sisters — who are now a junior and senior in secondary school — approached the Parent Teacher Association at their school and asked for funds to buy books featuring Muslim women for all of the libraries in their school district in Michigan.

The association agreed, and with its help Mena and Zena donated 200 books to each of the 21 schools.

With that success, they started a nongovernmental organization, Girls of the Crescent, to find books about strong Muslim women and donate them to public schools in the area.

The sisters discovered these books were not only in demand in their community but throughout the United States and the world. To date, the organization has donated more than 1,000 books to 66 schools, public libraries and mosques in the United States and seven international destinations, including France, Hong Kong, Morocco, Nigeria and the United Kingdom.

Mena and Zena have researched sites online to assemble a list of roughly 300 books portraying powerful Muslim women to donate or recommend to interested parties.

Zena discovered her now-favorite novel, The Lines We Cross by Randa Abdel-Fattah, through their research. The book explores the experiences of a young Muslim woman who has immigrated to the United States from Afghanistan.

Mena quickly read it, too. “It was such an amazing experience seeing a character like us in a book,” said Mena. “It brought us back to that time in fourth grade when we couldn’t find any books about Muslim women and felt like it was a pervasive issue.”

The response has been overwhelmingly positive. Mena and Zena say they’re working with American public schools to develop English curriculum reading lists that include many of the books they’ve found and hope the movement spreads beyond the American Muslim community.

Mena says lack of representation isn’t only a problem for female Muslims but also Native Americans, people with disabilities, and other groups.

“We want everyone to see themselves in books. But as female Muslims, we don’t feel qualified speaking for other people, so we want to mentor and teach other young people to start similar projects,” she said.