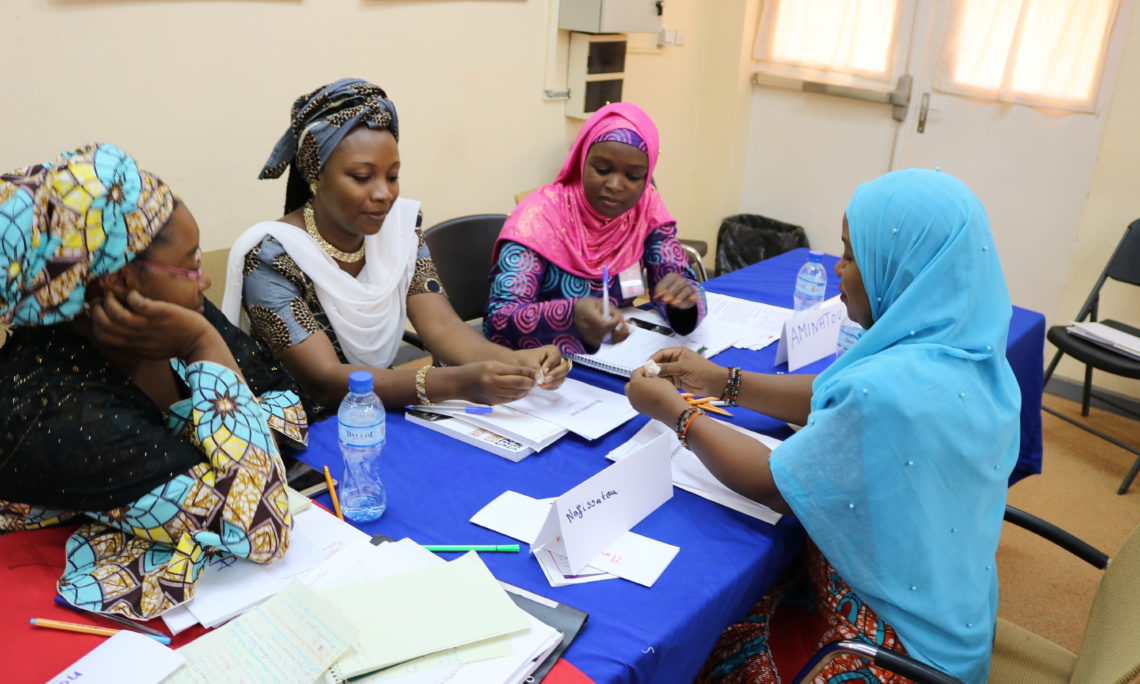 In Niger, two groups of determined women are making a difference for their communities and their own financial futures.  Brought together by U.S. Embassy Niamey in 2015 and again in 2017, the groups have become vital resources for professional advancement, social support, and peer-to-peer lending.

Inspired by a November 2017 workshop that included lessons in finance, 19 of our 30 program participants formed a peer-to-peer lending network, started with monthly contributions of $20 to $80. Calling themselves “Femmes Emergentes,” the group opened an account at a microfinance bank and, in five months, collected approximately $2,500.  As a collective, they decide who will receive grants of between $600 and $1,000.  These small but critical loans are making a difference, allowing the women to purchase inventory and build their businesses.

Sharing a laugh and camaraderie, the women entrepreneurs network to help one another.

The women’s groups also focus on continuing education. The Femmes Emergentes meet monthly, participating in workshops intended to increase capacity and broaden their business networks.  Some of the programs feature U.S. and West African speakers, “Shark Tank’ competitions for prizes, and site visits to meet with local business leaders.   Many of the speakers also engage in one-on-one counseling to review business plans.  All are well-received.  For example, after a recent week-long workshop, 92 percent of participants reported that they learned highly valuable information and 87 percent said that the events help increase their confidence as business women.

A second group calling themselves “The Women Entrepreneurs of the American Cultural Center” also formed their network after PAS, under the leadership of Boubacar Assoumi, IRC Director, hosted a webchat in 2015.  They continue to meet and host education sessions, as well as fairs where women members sell their products to the Embassy community and visitors at the American Cultural Center.

Perhaps most remarkable is that the women are eager to mentor others and help them succeed along with them.  Mentees come from throughout Niger, many from interior cities where access to programs is more difficult.  There are several stories of businesses that are now flourishing thanks to the one-to-one guidance provided by mentors. One Maradi-based vendor of products made from local plants says her business flourished thanks to lessons learned.

Yazi Amadou of Niger Business Angels Network partners with PAS to coordinate continued entrepreneur programming.   He is also a mentor in financing and entrepreneurship whose expertise is well-regarded by the women’s groups. He says that he is always impressed when the women come together –either for a Post-hosted program or on their own. “You can feel the chemistry among these women,” he says. “They are supporting each other and, in doing so, they are greatly advancing their families and their communities.”

If you are a woman entrepreneur in Niger interested in joining one of our groups, please contact Boubacar Assoumi at the American Cultural Center, AssoumiB@state.gov.