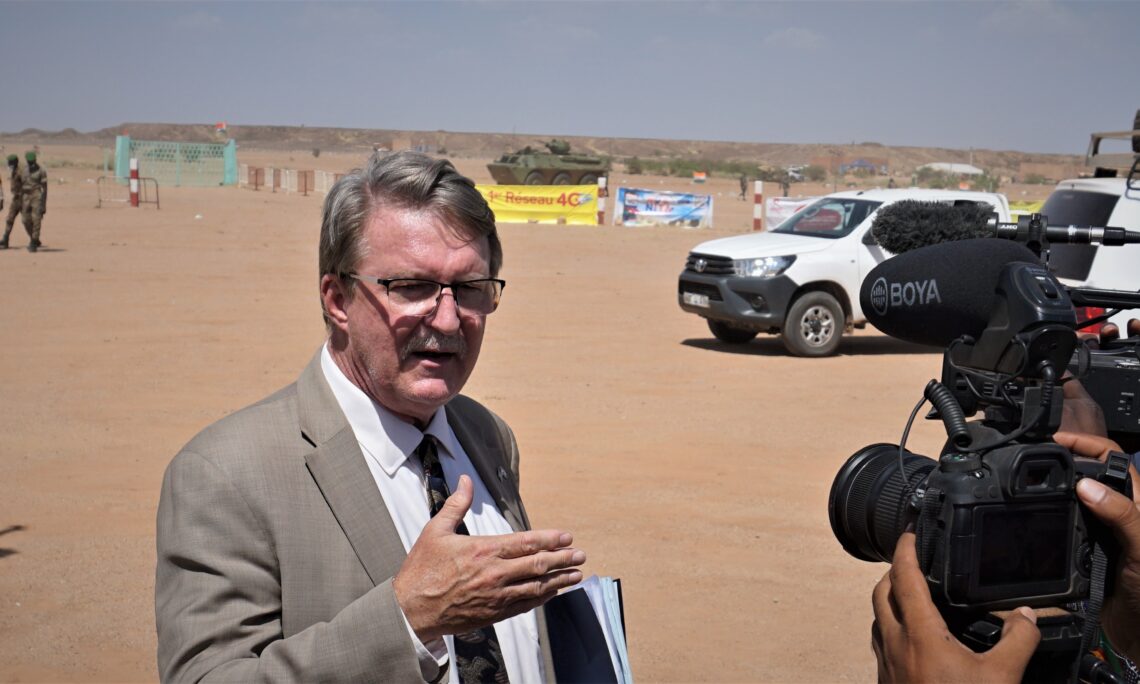 U.S. Ambassador Eric Whitaker led an embassy delegation to the region of Agadez from 16 to 18 September 2021 to attend of the ‘’Cure Salée’’ festival in Ingall.  During the trip, the Ambassador did a variety of activities, including donations and courtesy calls.

After the opening ceremony of the Cure Salée festival, Ambassador Whitaker told the media, “It is a great pleasure for me to be here at the Cure Salée today. Cultural festivals are an essential part of having a coherent national identity, and today we celebrate Niger’s rich and diverse cultural history and heritage.  It is an example of why I say, ‘Le Niger se lève.’”

Ambassador Whitaker visited the Sultan of the Air Ibrahim Oumarou, the Governor of the Agadez region, the Mayor of Agadez Mr. Abdramane Tourawa.  He congratulated these authorities for all the hard work they are doing to support the people of the Agadez Region.  He emphasized the Embassy’s “4D” approach to Niger: Diplomacy, Democracy, Development, and Defense.  “We integrate diplomacy, democracy, development, and defense activities to achieve common goals in the Agadez region and throughout Niger,” Whitaker said.

While in Agadez, Ambassador Whitaker made another important donation of books and equipment to the American Corner in Agadez.  This donation from the American people consisted of hundreds books in French and English, including American English language resources.  It also includes equipment such as computers, laptops, a printer, four UPSs, one projector, one wireless microphone system, and one new sound system.  The American Corner in Agadez was opened in February 2006 to provide information and resources on American culture, government, and history, as well as on learning American English and information on studying in the United States.

Ambassador Whitaker launched a women’s entrepreneurship fair at the American Corner in Agadez with the Embassy’s partners Femmes Emergentes d’Agadez.  Empowering women business owners is an important step in bolstering stability and economic development.  This event follows two events in Agadez in October of last year.  The first was a “Boot Camp” for leadership and entrepreneurship training with our Young African Leadership Initiative alumni.  The second was a program entitled “I am committed to peaceful elections” which worked in collaboration with the National Youth Council of Niger to encourage Nigerien youths to participate peacefully in Niger’s elections last December and February.

Ambassador Whitaker also visited the Gidan Albarka orphanage in Agadez where he and the embassy team donated food and cooking items, books, and other equipment for the orphans.