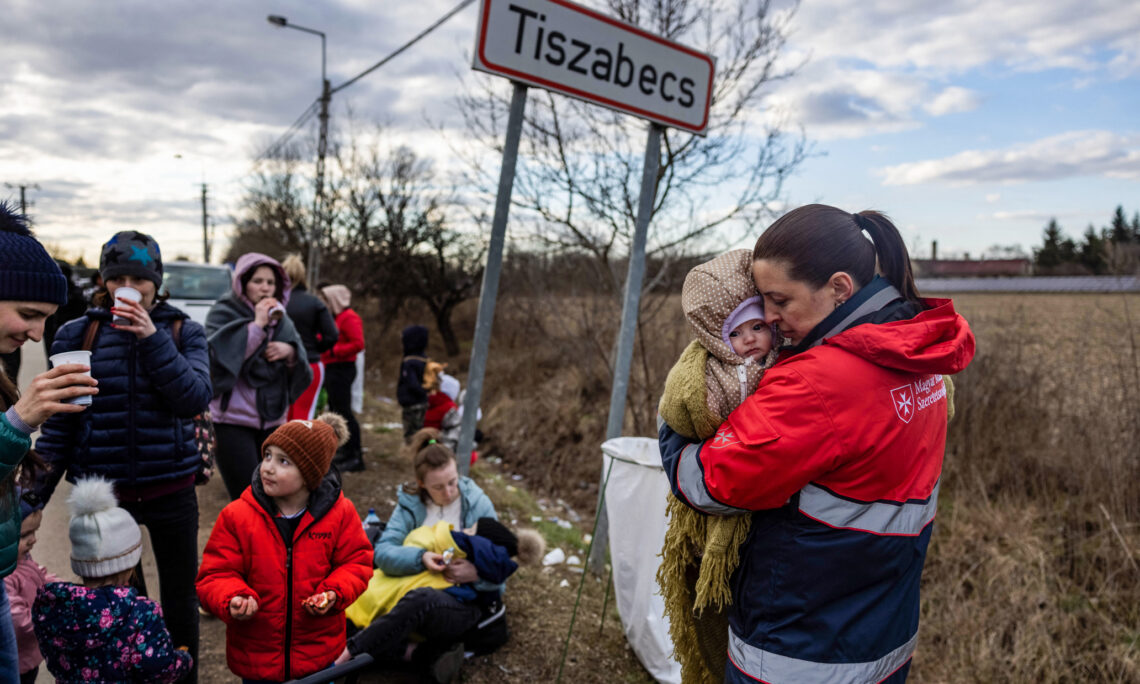 TISZABECS, HUNGARY - FEBRUARY 27: A volunteer holds a baby while people wait with their belongings at the Tiszabecs-Tiszaujlak border crossing as they flee Ukraine on February 27, 2022 in Tiszabecs, Hungary. Refugees from Ukraine have fled into neighboring countries such as Hungary, forming long que
By ShareAmerica -Mar 3, 2022

In recent days, the Russian military has bombed schools, hospitals, homes and even a Holocaust memorial in Ukraine, forcing hundreds of thousands to flee their communities for safer regions.

The additional humanitarian assistance, through the U.S. Department of State and the U.S. Agency for International Development, will help secure food, safe drinking water, medicine and shelter.

That addition brings the total humanitarian assistance the United States has provided for Ukraine since Russia’s invasion in 2014 to nearly $405 million.

USAID also has deployed a 17-member USAID disaster relief team, currently based in Poland, to work with partners to reach Ukrainians with vital humanitarian assistance.

“Our funding will also help humanitarian organizations maintain contact between family members who have been separated due to the conflict, hopefully leading to reunification in some cases,” U.S. Secretary of State Antony Blinken said on February 27.

“Russia’s violence has driven over half a million Ukrainians from the country in just a few days, including children, the elderly, and people with disabilities, who are making harrowing journeys through conflict zones,” Blinken said March 1 at the United Nations Human Rights Council.

The secretary said Russia’s military actions destroyed critical infrastructure, which provides millions of people across Ukraine with drinking water, gas to keep them warm in harsh winter weather and electricity.

“Civilian buses, cars, and even ambulances have been shelled. Russia is doing this every day — across Ukraine,” the secretary said.

Even before Russia’s renewed invasion, an estimated 2.9 million Ukrainians were in need of assistance, and 1.5 million were displaced because of Russia’s 2014 invasion.

Blinken praised neighboring countries for hosting Ukrainians and other nationalities who fled the country. The United States is working with allies on a diplomatic solution that allows countries to keep their borders open while inviting international organizations to provide assistance for refugees.

Blinken saluted Ukraine for fighting “with courage and pride against Russia’s brutal and unprovoked assault.” He said the United States will continue to support a staunch ally.