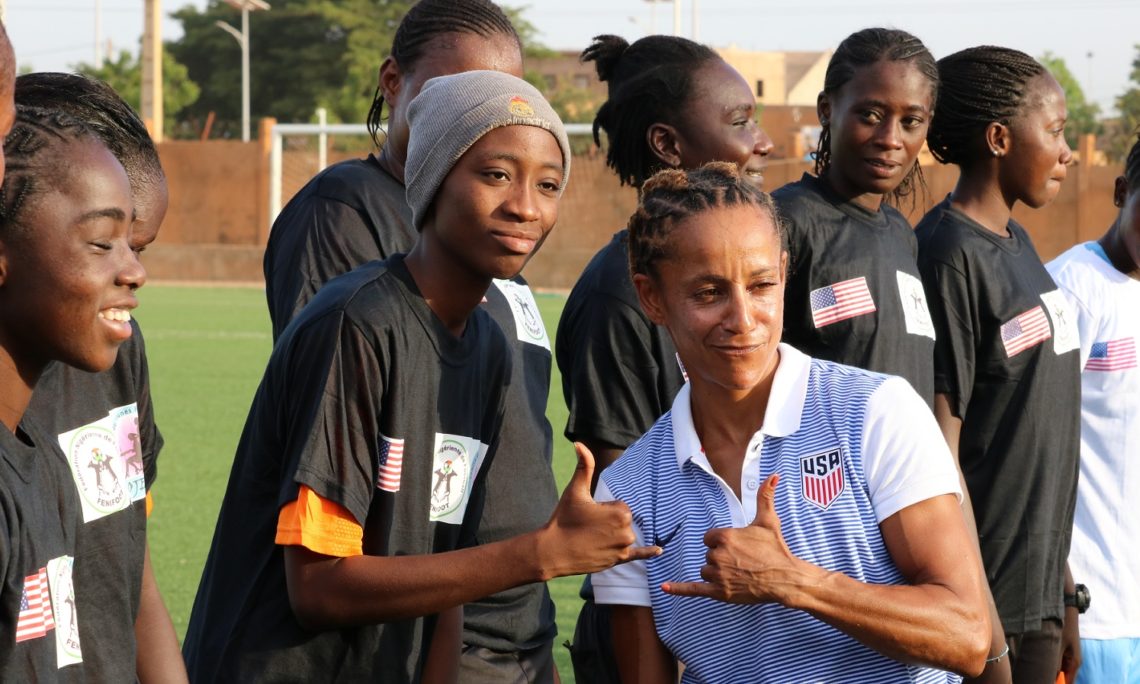 U.S. Sports Envoys Staci Wilson and Joanna Lohman – a member of the gold-medal-winning women’s soccer team at the 1996 Olympic games, and a world champion and current player for the Washington Spirit respectively – visited Niamey and Agadez for a robust program to show girls, coaches, and parents how soccer can be a gateway to success in life.  They had a non-stop schedule that had them leading neighborhood pick-up games, participating in coach and parent training sessions, and meeting contacts and regional dignitaries.  In Niamey, they had the opportunity to attend a soccer match between two of Niger’s national women’s teams.  Ambassador Eric Whitaker opened the game with remarks emphasizing the importance of women’s sports, citing words of inspiration from American athletes Serena Williams and Jackie Joyner-Kersee.  In Agadez, Wilson and Lohman visited the American Space and met with youth for an informal chat, as well as meeting a with U.S. government program alumni.  In addition, they conducting intensive training with coaches and drill sessions for young female soccer players from six regions throughout the country.  They met with parents for a question-and-answer session where they impressed upon them how sports, particularly for young women, can lead to success, sharing their personal stories as examples.  They observed a girls’ soccer match at which they presented coaches with soccer balls and again offered suggestions to the players and coaches.  Before leaving, the envoys and Public Affairs Officer Cynthia Faby met with the Sultan of Agadez, who welcomed them in warm approval of their message and invited them to tour the mosque, a UNESCO heritage site.  Upon their return to Niamey, Wilson and Lohman were honored at a FENIFOOT reception before departing for the United States.  At every opportunity, the envoys were true inspirations, demonstrating how soccer can change lives.  During events, they were perpetual dynamos, conveying their passion for sports and conviction that sports had solidified their leadership abilities, determination, dedication, resilience, and talent for working effectively with others.  The Embassy recognizes the significant contribution our partners, COJEFIL, Niger’s Committee of Young Female Leaders, and FENIFOOT, the Nigerien Football Federation, made to the program through a combination of curriculum development, logistics management, and sports expertise.  We are also grateful for the efforts of our other partners, both governmental and non-governmental, in making the program a success.