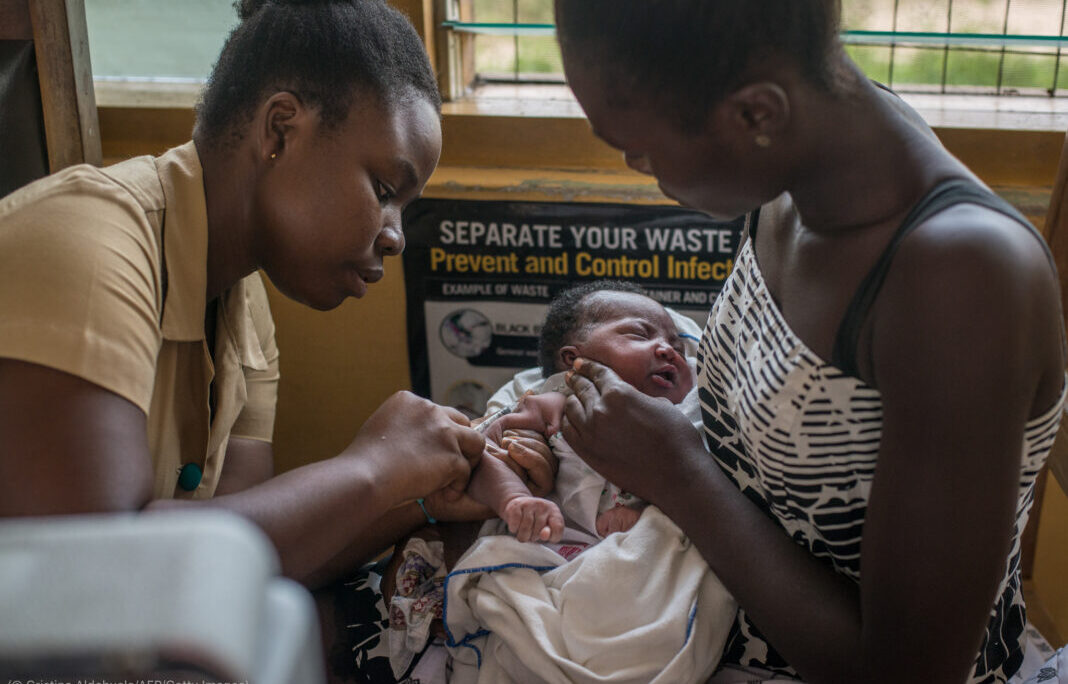 A nurse administers a vaccine to a child at Ewin Polyclinic in Cape Coast on April 30, 2019. - Ewim Polyclinic was the first in Ghana to roll out the Malaria vaccine Mosquirix. After Malawi, Ghana is the second country to launch the vaccine. Known by its lab initials as RTS,S but branded Mosquirix,

The World Health Organization (WHO) on October 6 recommended a malaria vaccine called RTS,S/AS01 (RTS,S) for widespread use in sub-Saharan Africa and other areas with high malaria transmission.

The pharmaceutical firm GlaxoSmithKline (GSK), based in the United Kingdom, developed RTS,S, also called Mosquirix, in partnership with U.S.-based nonprofits, including a public health group called PATH and the Bill & Melinda Gates Foundation, both headquartered in Seattle. Other U.S. government partner organizations also were key contributors to the effort.

WHO Director-General Dr. Tedros Adhanom Ghebreyesus called his organization’s recommendation a “historic moment.” Combined with other prevention measures, the new vaccine could save tens of thousands of children annually.

“For centuries, malaria has stalked sub-Saharan Africa, causing immense personal suffering,” Dr. Matshidiso Moeti, the WHO’s regional director for Africa said. “We have long hoped for an effective malaria vaccine and now for the first time ever, we have such a vaccine recommended for widespread use.”

Spread by mosquitos, malaria infects more than 200 million people annually and kills more than 400,000 people each year, mostly children under age 5. Insecticide-treated bed nets and other preventive measures have significantly reduced malaria’s toll but a vaccine had remained elusive.

The WHO recommendation is based on results from an ongoing pilot program in Ghana, Kenya and Malawi that has reached more than 800,000 children since 2019. It found that RTS,S reduces severe malaria cases by 30%. When combined with anti-malarial medications, the drug is 70% effective, GSK says.

The pilot program was funded by nearly $70 million in aid from:

The U.S. is the largest donor to the Global Fund and a major Gavi donor. The Bill & Melinda Gates Foundation, an American philanthropic organization, is a primary donor to both Unitaid and Gavi.

U.S. and partner researchers continue to strive toward the WHO’s goal of a vaccine that is 75% effective against malaria by 2030. Researchers from Burkina Faso, India, Kenya, the United Kingdom and the United States have already developed and tested another vaccine derived from this one that shows promise.

“This is a huge step forward,” said Julian Rayner, director of the Cambridge Institute for Medical Research.