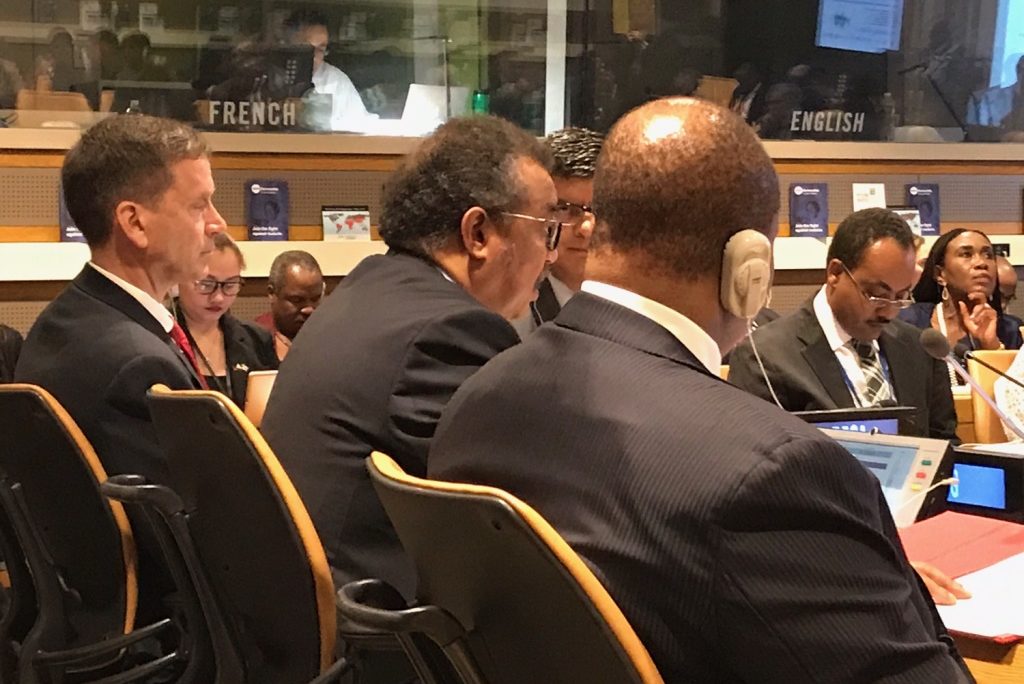 ADMINISTRATOR GREEN: Good evening ladies and gentlemen. As my African friends would like to say all protocols observed. [laughter]

Earlier this week, President Trump reaffirmed America’s dedication to leadership in areas like food security and global health. In particular, I’m excited for the President’s Malaria Initiative, PMI. Why? He did so because President Trump, the leader, understands that malaria isn’t simply a matter of global health. Malaria itself is a tax that robs countries of their vitality, of their strengths. It takes a growing portion of a national budget. Why? Why did he choose to take this on? Because the work of the President’s Malaria Initiative and the battle we all fight is measurable in its results. I think that appeals to him as a businessman.

Why else? Because be is compassionate. It is part of what he termed our work to elevate the human condition. Why else? Well because the fight against malaria works through strong partnerships, public and private, America and most countries. There’s a recognition that this is not something that any of us can do alone. But just perhaps, all of us together, working together, each of us bringing our tools and our capacities, just maybe we can conquer this scourge.

The reality, as we all know, is we will never have enough money as nations to do everything that we would like to do. That means we have to make choices and we have to prioritize. We in the U.S. government choose to prioritize to fight against malaria. Today I am pleased to announce that we will launch new President’s Malaria Initiative programs in Cameroon, Cote d’Ivoire, Niger, Sierra Leone, and we will also expand dramatically the PMI program in Burkina Faso.

Working in close partnership with National Malaria Control Programs, this new expansion that I announced will benefit an additional 90 million people in sub-Saharan Africa. With it, we now contribute to effective malaria prevention and controls for over a half a billion people from the Sahel to the Horn of Southern Africa.

We hope this expansion builds up a resounding success in all of you abroad in Africa where 11 PMI-focus countries have achieved more than a 40 percent drop in malaria-related deaths since the initiative began. Rwanda, for example, has seen a 67 percent reduction in the death of children under five, those who are particularly susceptible to malaria. Zambia has cut in half the number of deaths for these same children, in just over five years.

These are the products of partnerships, true partnerships, which we believe in. We believe they must continue and they must expand. So, we have all working here exceeded malaria goal in the last decade. And we are all here because despite that success, we have a long, long way to go. Malaria continues to cause unacceptable levels of death and suffering. Especially in Africa, but not only in Africa. In Africa, as you hear over and over again a child dies every two minutes because of this terrible disease. When I taught school in Africa thirty years ago, all the time, my children fell ill. They lost far too many students. I knew that my village was losing future leaders, people who could lift their [inaudible]. It’s something we must do not just for the sake of those involved but for humanity.

We must save this next generation because they might just help provide the answers that we need to so many challenges. So, with these announcements, we have our renewed commitment to all of you. We promise to work closely with you shoulder to shoulder, every step of the way. We promise to fight back and conquer malaria together.

It is an honor to be with all of you, and we look forward to celebrating your successes. Thank you.